Attorneys at Law in The Dalles, Oregon for 100 years.

Dick, Dick & Corey, LLP has a long history of providing a wide range of legal services to the Mid-Columbia and Eastern regions of Oregon. Founded by Frank G. Dick in 1913, the firm has been serving the various needs of its clients for a century.

Frank Dick arrived in The Dalles from the mid-west shortly after the turn of the 20th century and studied the intricacies of the law with Alfred S. Bennett and Nicholas J. Sinnott, law partners and two of the preeminent attorneys in eastern Oregon at the time.

After establishing his own firm, Frank continued to practice law in The Dalles for decades. In addition to his law practice, Frank was a wheat and cattle farmer and served on The Dalles school board. 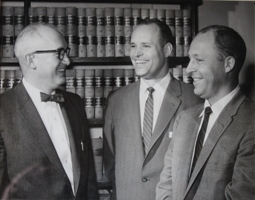 Frank’s passion for the law inspired three of his sons, William G. Dick, Roger L. Dick and Edgar M. Dick, to follow in his footsteps in the practice of law after each served in World War II. The brothers formed a formidable legal team in the region for several decades, representing both large entities and individuals with the same personal attention.

William G. Dick II (Bill), current senior partner in the firm, joined his uncles in the family law practice in 1978. Drawing on his uncles’ considerable expertise and experience, Bill has built a significant client base, representing individuals, business entities and government bodies in legal matters.
In 1994, Jason R. Corey joined the law firm. Like Bill, Jason has developed a large client base representing individuals, entities and government bodies throughout the Columbia Gorge region and Eastern Oregon.

The attorneys at Dick, Dick & Corey, LLP, along with the professional, personal and capable staff at the firm, provide a wide range of legal services to their clients. These services include estate planning, wills and probates, trust administration, business entity formation and representation, family law matters, including divorce, custody, visitation and support matters, adoption, real property transactions, government entity representation and more.

With over five decades of legal experience between them, Bill and Jason possess significant understanding of the nuances of the law and solutions for the legal needs of their clients.